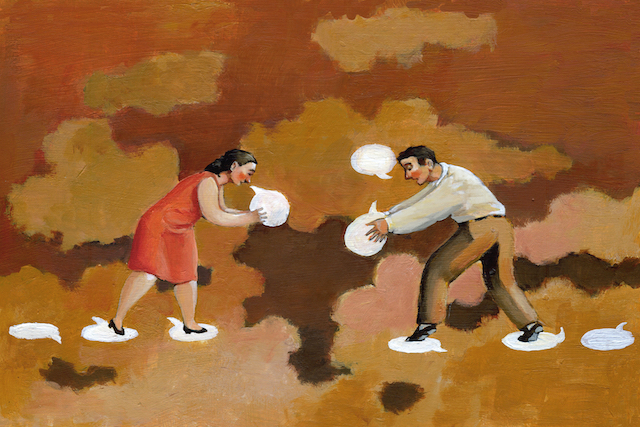 “Raise your words, not your voice. It is rain that grows flowers, not thunder.” ~Rumi

I had one of those really intense arguments with my partner recently, and it made me realize the importance of knowing how to fight well in a relationship.

That might sound like an oxymoron, but there isn’t a relationship I know of where the couple doesn’t fall out at one point or another. Fights can make or break a relationship. That’s why it’s important you know how to fight well—because the success of any relationship isn’t based on how well you manage the good times but on how well you can deal with the bad.

Basically, it’s about how well you can learn to fight.

Learning to fight well is important because it can help bring up lots of hidden stuff that’s been lying dormant for years; it enables you to be really honest with each other, which helps you develop deeper levels of trust; and studies have shown that learning to fight well can even improve the intimacy in your relationship.

But back to our fight.

It all started when I was out at friend’s house and lost track of the time. My partner and I had agreed to spend some quality time together that evening, and when I noticed the time, my heart sank. I knew she would be upset as I made the difficult call home, and yep, I was right. She was livid. We then descended into a really uncomfortable argument of blame and counter blame, with a bit of defensiveness thrown in for good measure.

Criticism and defensiveness are two of the four horsemen of the apocalypse, as highlighted by renowned relationship experts Drs. John and Julie Gottman. They noticed these two traits are highly correlated to relationships that lead to breakup and divorce.

Whenever my partner and I would have our worst arguments these two traits would always be present, and this time was no different.

That’s why becoming more aware of how you fight can help you avoid relationship Armageddon and instead increase the trust, safety, and love in your relationship. To help with this here are seven key steps to follow when you feel as if you’re descending into another one of those earth shattering fights:

Some arguments can help grow the relationship and develop greater levels of trust and intimacy between both parties. Other arguments are the opposite; they create a hierarchy and a power struggle, which diminishes respect, trust, and love.

If we rewind to the start of our arguments we can predict to some extent their “success” by the language that started them and whether it was “hard” or “soft.”

Hard language starts with generic hyperbole like “You always…” or “Why do you never…” or “I knew that you would…” Soft language uses “I” statements and focuses on the actions that took place, how they made us feel, and what we want to happen.

My partner’s language that day was very “hard.” She criticized me and I immediately became defensive as the original story in my head started to change in response to her accusations. The firm agreement I knew we’d made became a tentative expectation in my mind. My lateness was no longer my responsibility but my friend’s, who had been delayed preparing food. Bit by bit I retold the story of what had happened and made myself into a victim of my circumstances instead of the owner that I really was.

The language used at the start of our exchange influenced my response and how the subsequent argument progressed.

The Gottman Institute reported that they can predict with 94 percent accuracy how a discussion will end based on the language used to start it. The softer and kinder our words, the less defensive we become, meaning we are more open to taking responsibility and creating connection instead of disconnection.

A key principle to help with this is to use language to complain but don’t blame.

Luckily, I had a one-hour drive home to work out what had happened and to get some perspective following our argument. I didn’t realize it at the time, but this was a crucial period because I used it to work through what had happened, and there’s no way we could have achieved such a good outcome without the time this gave us.

I’ve learned that it’s wise to agree in advance to call a “timeout” or “press pause” before arguments begin. In the past I’ve attempted to call a timeout to create the space to calm down, but this has only made matters worse.

My partner and I now have an agreement that if either of us needs to call a timeout in an argument the other will respect the request. It can be infuriating at the time, but arguing when you are in a low mood or heightened sense of emotion is never going to assist your dialogue. Therefore, it’s important to create space as much as you can.

On that drive home the first thing I did was shout and scream about what had happened. My inner child had a field day as I moaned and complained to my imaginary passengers about what she’d said and how wrong she was. It was fantastic, and a very cathartic way to clear the negative energy and emotions I was holding on to around the conversation.

When we had the initial phone call I went into a stress response as my body became flooded with cortisol, and my heart rate went through the roof. Expressing my emotions and doing lots of deep breathing on the way home helped me flush the cortisol out of my body and return it to its original state. Without doing this I would have taken those negative emotions and feelings into the resumption of the fight on my return home.

The intense emotions we have during a fight form a negative filter through which we see the relationship. There’s not much our partners can say that we won’t interpret the wrong way when we come from this place. That’s why it’s so important to clear the filter and express your emotions as best you can.

It’s important to make sure that you find somewhere safe to do this, however. Doing it next to your partner won’t go down well, so get out of the house and find somewhere to express your emotions as cleanly and safely as possible so you don’t take it into your next fight,

Once I’d let go of the emotions I started to calm down, and it was only then that I realized I could let go of the story I’d been telling myself. It was at this point I decided to tell myself a new story that started with “What if…”

“What if I wasn’t being honest with myself?”

“What if I wasn’t taking responsibility for something?”

This provided a new lens through which to see the situation. With my strong emotions now expressed it was like a fog had been lifted, and I could see the situation from a new vantage point. This new perspective allowed me to completely shift my thinking on what had happened and relinquish my grip on the version of events I had concocted to help deal with my partner’s “hard” response.

It would have been easier to take responsibility for either nothing (be stubborn) or everything (be a people-pleaser). But the more honest I was with myself, the more I could distinguish between what was mine and what was not.

For example, we had made a clear agreement about what time I would get back. I knew the food was going to be late, so I could have explained to my friends and left without eating. I knew I didn’t have a watch, so I could have checked on the time from somewhere else.

Previously I’d been telling myself the story that I needed in order to ensure I wasn’t in the wrong and to protect the scared little boy inside myself that was upset at being made to feel bad.

This also helped me to realize what I was not prepared to take responsibility for. I was being accused of some things that weren’t right. In fights we easily turn critiques about our actions into criticisms of our character. So, for example, in this scenario I was late home because I didn’t prioritize my partner. This is a critique (and is true); however, a criticism would be that this action makes me a selfish person (not true).

Taking ownership for what was mine helped me release responsibility for what was not. This helped me to feel much stronger and clearer in owning my part in the situation and how I communicated it to my partner, as a result.

When I arrived home I was excited to share what I’d learned with my partner and imagined us having a great conversation about it. That didn’t happen because she was still really annoyed with me. I came through the door with this great insight and awareness about the argument and how and why I’d behaved as I had. However, I was met with stonewalling.

I’d used the journey home to vent and express my feelings, so the emotions in me had subsided. However, my partner had been sat at home the whole time stewing and making matters bigger and badder in her head, so we were in very different places. She still needed to express those emotions and get them out of her system before she was able to communicate with me in a productive way, and I needed to create space for her to do that.

That was really tough because I realized I was in one place (emotionally and physically expressed, and now ready to take responsibility for what was mine), whereas she was somewhere else (still emotional and not ready for a rational conversation).

Fights often get out of control when you are both full of emotion and expressing it from a place of fear. The most important thing missing in most fights is a safe space within which to share and be heard

When my partner and I fight we often fight for space to be heard as much as we argue about whatever the fight appeared to be about. Most fights are secret battles for power in the relationship and not really about whatever started them.

To fight well requires one of you to have enough presence, away from your emotions, to create a safe space (or the “container”) within which to have the conversation.

It really helped me when she said the simple words “I was wrong to say you were selfish.” I felt validated, which helped further develop the trust we had for each other.

She would never have been able to admit that if we’d not created the sufficient safety for us both to be honest with each other.

This certainly wasn’t an easy conversation, but it would never have been possible if we hadn’t taken steps to create some space to express our emotions, take responsibility for what was ours, and then create a safe environment within which to discuss it.

I learned that it’s not what we fight about but how we fight that’s most important.

Mike is a writer, coach and founder at The Inspiring Men Project. He helps men and women to understand each other better and men to understand themselves so they can take their relationships and lives to the next level. Connect with Mike and get his eBook “How to Become a Man Women Love (and Men Respect)” at theinspiringmenproject.com

The post How to Fight Well in Your Relationship appeared first on Tiny Buddha.