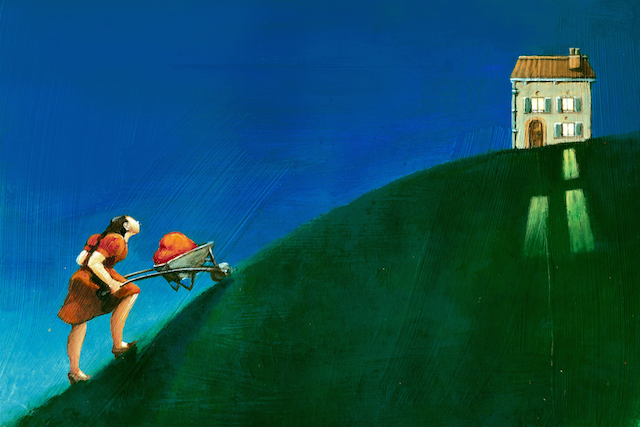 “When perfectionism is driving, shame is riding shotgun, and fear is that annoying backseat driver.” Brené Brown

Sometimes I feel like the girl who cried film.

I first wrote a blog post introducing Tiny Buddha Productions three years ago, and despite my earnestness, passion, and enthusiasm, I have only one short film to show for myself.

When I was working on this short, which we filmed partly in my apartment—in my bedroom, amid the worn clothes and shoes in my walk-in closet even—I felt more alive and aligned than I’d felt in years.

I was doing something I’d wanted to do since college, in LA, the mecca of filmmaking, with a team of talented people I admired and respected.

I was telling a story that felt deeply personal and authentic to me, sometimes tearing up behind the camera because it was finally happening, after months of planning, failing, and trying again.

It kind of felt like a Jerry Maguire moment. I wasn’t my father’s son again, but I was the old me again—the me who felt most at home amidst lights, costumes, and makeup, even when I was standing back and watching other people shine. The me who felt a sense of belonging in a family of oddball actors and crewmembers who seemed like reflections of myself.

Then we released the short. And it seemed to resonate with people. I was proud of what we’d done. Proud of who I’d become. And I couldn’t wait to write the next. Except I couldn’t.

I couldn’t think of another idea that felt good enough. I’d start brainstorming, judge everything I wrote as cliché and uninspired, then delete it all, like a frustrated kid scribbling over a coloring book page filled outside the lines.

Endless blank pages mocked and pressured me, telling me I was a sad excuse for a screenwriter and I better get it together soon because time was running out.

It was like I was timing myself running a mile, except I was too scared of my potential inadequacy to move my legs. So I just stood there, staring at the finish line in the distance, losing confidence as each second ticked by on the maddeningly loud stopwatch inside my white-knuckle-clenched fist.

It took me a year to finally commit to an idea, one my boyfriend and I had explored years prior, this time for a feature film. This story seemed obviously meant for me to write, given the themes and parallels to my own life experience. And once again, it felt like magic.

That idea swallowed the track whole, the finish line and stopwatch instantly engulfed, surrounding me in the vast open space of inspiration and possibility. And it filled every crevice of my available brain space. Whether I was flossing, folding laundry, of feeding my fish, I was filming it in my head.

Characters, plot points, and symbols came to me with surprising regularity, and though the words didn’t always flow, when they did, it was just them and me. A universe of sparkling ideas I was floating through, weightless, oblivious to the world of stresses and struggles I’d left far below.

It all sounds kind of corny and over-romanticized, I know, but that’s how it was. Life can sometimes feel unbearably serious, overwhelming, and urgent. Like it’s just one fire to put out after another. But when we’re creating, time seems to stand still. The flames freeze, far off in the distance, and all we can see is what we feel in our hearts about what we’re bringing to life.

It took me over a year to write the film, with the help of a talented mentor who taught me things I didn’t know I needed to learn and showed me possibilities I didn’t know to create. But I did it. Draft after draft, I crafted something that felt meaning and beautiful and true.

Then I re-wrote parts after getting a budget to make it more affordable to film.

And then recently, once again, I stalled. To be fair, I’m currently spread a little thin, and pregnant, which, as you may know, can be mentally and emotionally exhausting. But I’ve also procrastinated on the action steps to get this made because I’ve felt inadequate and scared.

I’ve questioned whether this is a realistic goal, given that lots of people try to raise money for films and fail.

I’ve doubted my aptitude for producing, reminding myself that I’ve worked in solitude for over a decade and possess the networking skills of a feral cat.

I’ve even considered that maybe I’m actually an untalented hack who misled herself into believing she has something new to offer, when really she’s just a one-note blogger who should stop fantasizing and stay in her lane.

All the while I’ve paralyzed myself with endless comparisons, juxtaposing prolific filmmakers’ portfolios against my embarrassingly vacant IMDB page.

I’ve known for a while I needed to write a pitch for investors, and I’ve had many open windows when I could have begun working on it. But instead I’ve read celebrity gossip. And emailed my sister about inane life events that really don’t need to be rehashed. And scanned my growing stomach for stretch marks while eating small cups of cereal, as if five small cups are somehow better than one average-sized bowl.

But this week, I did something different. This week I made one tiny choice that finally enabled me to get out of my own way: I decided to stop judging and start doing.

I decided to stop judging my work—to suspend my disbelief about whether it’s good enough and act as though I know it is.

I decided to stop judging myself—to stop berating myself for the skills I think I lack and simply focus on the task in front of me.

And I decided to stop judging the process—to consider that maybe every slow, timid step happened exactly how and when it needed to, so there’s really no reason to paralyze myself in shame.

I’m not finished yet, and I have a ways to go, but I have a start. I’m sure I could improve what I have, but at least I have something. And in time, I’ll make it stronger.

This isn’t an easily accessible path for perfectionists. We want to do it all, and perfectly, right now. We don’t want to take it slowly, or allow ourselves to be incompetent while we learn, through practice, how to excel.

We want to speed down the highway of consistent progress toward our goals. We don’t see the speed bumps and detours as valuable because we take them all so personally—as if we could somehow find or create a more smoothly paved path if only we did better. If only we were better. But it’s all valuable.

This is how we grow—all of us. By doing. By allowing ourselves to be where we are until we learn to get beyond it. By learning from every struggle and setback. No one can jump from zero to a hundred. No one can wake up an expert on something new. We simply have to go through the process.

We can use all our energy questioning, doubting, and judging, or we can use it to move forward, one tiny, imperfect step at a time, knowing we’re getting closer to our goals every day.

I’m not gonna lie—this isn’t easy for me to accept. I would rather do only what I know I can do fast and well. I would rather not risk being judged as inadequate. And if I could, I’d spend forever floating in that universe of sparkling ideas instead of hopping my way through an obstacle course of logistics, often feeling blindfolded. But I know this is what it takes to evolve and put myself out there.

It’s messy and confusing and frustrating. It’s hard and scary and uncertain. There are no guarantees as to where it will all lead, or if the time invested will feel worth it in the end. But every great story involves risk and hardship. And every inspiring hero soldiers on, perhaps temporarily disheartened at times, but never down for the count.

In the end, she might not get what she wants, but she usually gets what she needs. She grows into someone stronger and wiser. Someone better able to live, love, and experience life with more passion and less fear.

So maybe I’m not the girl who cried film. Maybe I’m just a human being, like the rest of us, learning to get out of my own way and doing the best I can. My story might be slow and imperfect, but it’s still going. I’m still going. And I know I’ll go a lot further if I choose to stay focused on that.

Lori Deschene is the founder of Tiny Buddha. She’s also the author of Tiny Buddha’s Gratitude Journal and other books and co-founder of Recreate Your Life Story, an online course that helps you let go of the past and live a life you love. An avid film lover, she recently finished writing her first feature screenplay and is fundraising to get it made now. To get daily wisdom in your inbox, join the Tiny Buddha list here.

The post Slow, Imperfect Progress Is Better Than None at All appeared first on Tiny Buddha.