For well over a century, these “food stories” have been told in photographs, from the technicolor spreads featured in McCall’s in the mid-1930s to the lush pages of Gourmet in the 1980s.

These days, we can instantly access the archives of 20th-century pioneers like Nickolas Muray or Irving Penn, but still, food photography continues to evolve at breakneck speed. Just when you think you’ve seen it all, you realize you’ve only scratched the surface.

We asked 500px Ambassador Dina Belenko about her experience working with food. As it happens, she agrees with Zimmern: it all comes down to storytelling. Read on for Dina’s nine behind-the-scenes tips for crafting the perfect narrative for your next food shoot. 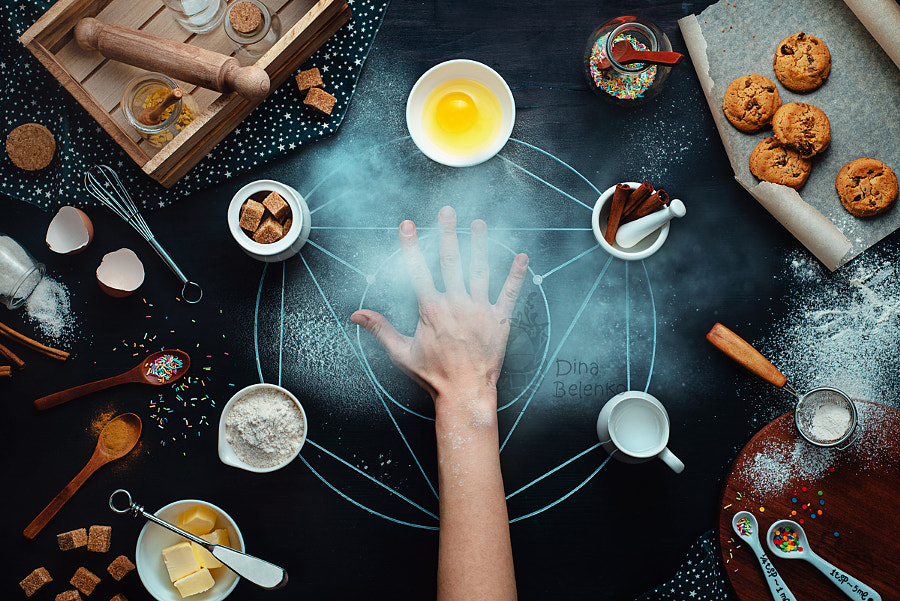 To make your photos more accessible, think about using a first-person perspective. “Instead of shooting a lonely coffee cup, maybe you have a hand holding the cup,” Dina says. “A human presence instantly gives you a huge increase in relatability. And, consequently, likes and sales.”

But you don’t necessarily need to include an actual hand in order to get a similar result. As Dina puts it, the photo just has to feel “lived-in.” That means that not everything has to look polished or picture-perfect, as long as it suggests a larger narrative.

Envision a real or fictional character behind every dish you create, and chose every prop to suit that theme. “Imagine their workplace,” Dina suggests. “What items would they have? Would their tables be neat or a complete mess? What would the table of a botanist look like? A cartographer? A retired mortician? A witch? Your favorite writer?” 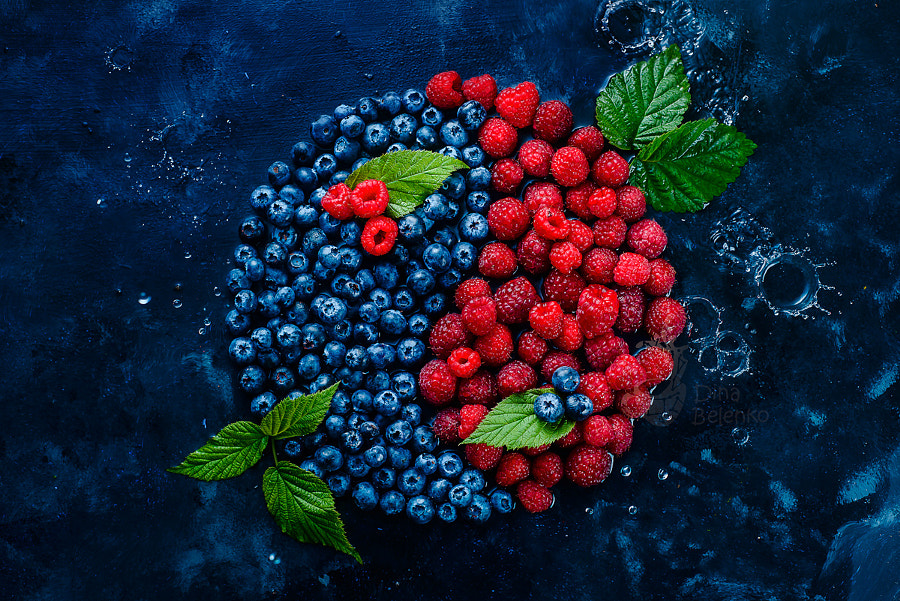 2. Food can be symbolic

In the Middle Ages, pomegranates in paintings represented resurrection and immortality, while cracked eggs symbolized loss or helplessness. Food photographs can illustrate a specific dish or highlight a particular culture, but they can also carry hidden layers of meaning.

If you can tap into the conceptual power of food, you’ll have an image that appeals to a large variety of buyers, including those both in the food industry and outside of it. 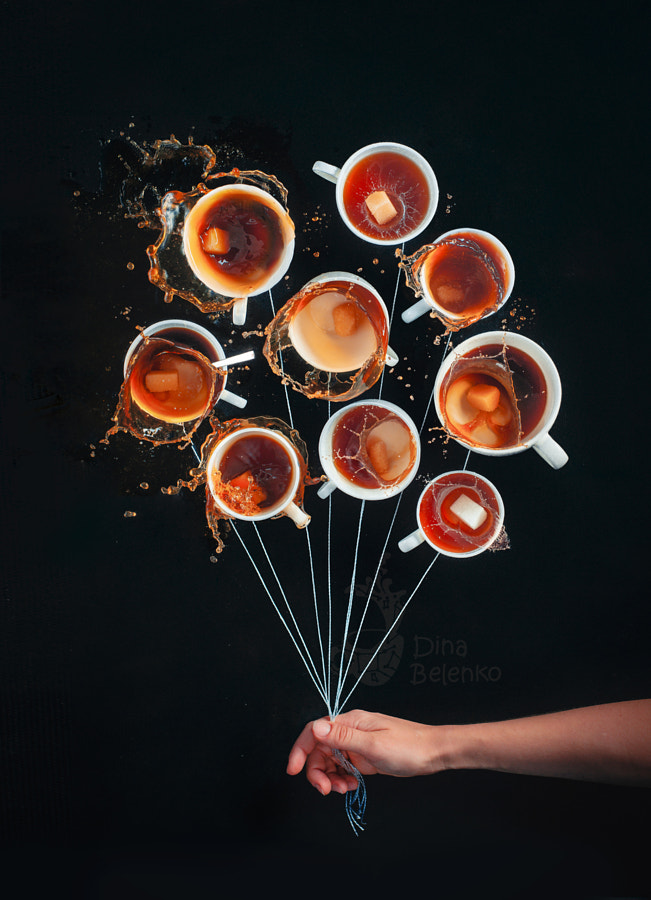 “Recently, I’ve noticed more metaphors in food photography,” Dina says. “A coffee cup broken to smithereens, for example, can represent someone’s broken relationships. Or a crack in society. It’s simple symbolism, but it still works, and it’s so refreshing to see.” 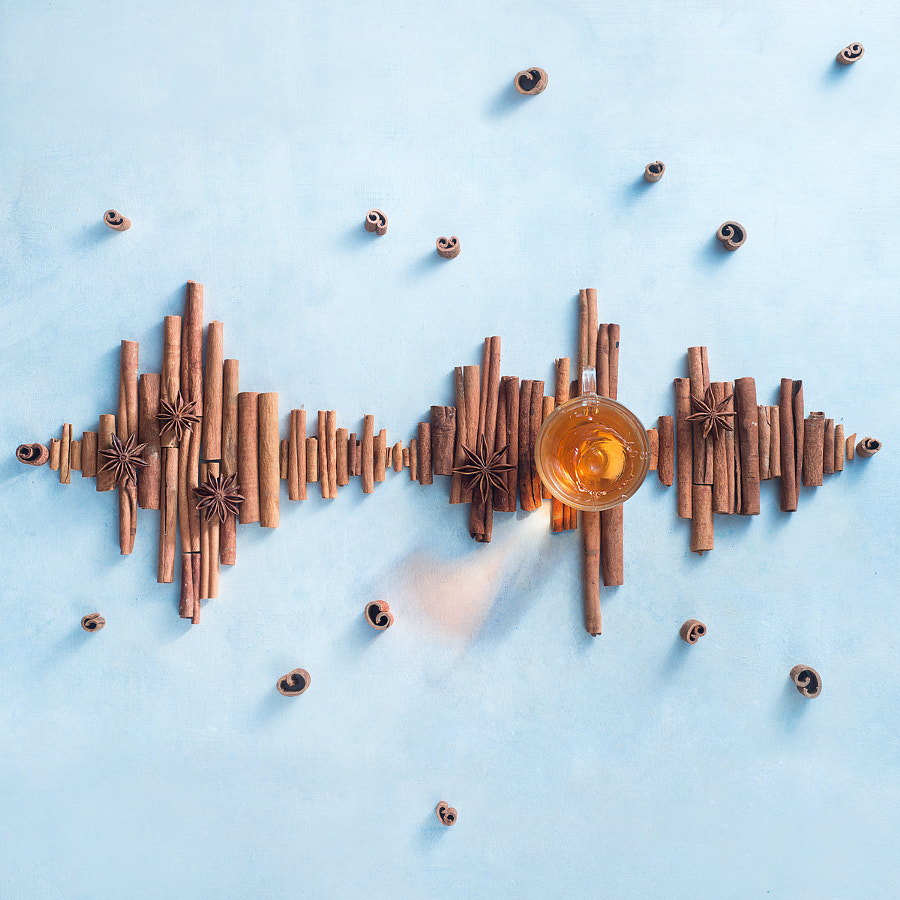 “Back in the day, when I was an amateur photographer, I would gather any prop I liked and try to arrange something beautiful on the go,” Dina admits. “It wasn’t productive, to say the least.” These days, she draws detailed sketches before her shoots.

“I can’t overstate the value of sketches,” she tells us. “They prove even more important when I’m working with certain kinds of food. Ice cream melts, soups cool down, and desserts lose their luster. Having a sketch to refer to helps speed up the process and ensure that everything goes according to plan.”

We use the word “probably” because there are exceptions to the rule. “Brandon Sanderson, one of the hosts of the podcast “Writing Excuses”, has said that there two types of writers: discovery writers and outliners,” Dina explains. “Basically, discovery writers come up with characters and just see where the story leads them. Outliners plan and lead their characters to a specific conclusion. I believe the same can be said about photographers. Most food photographers are outliners, but that’s not to say that there aren’t a few discovery food photographers out there.” 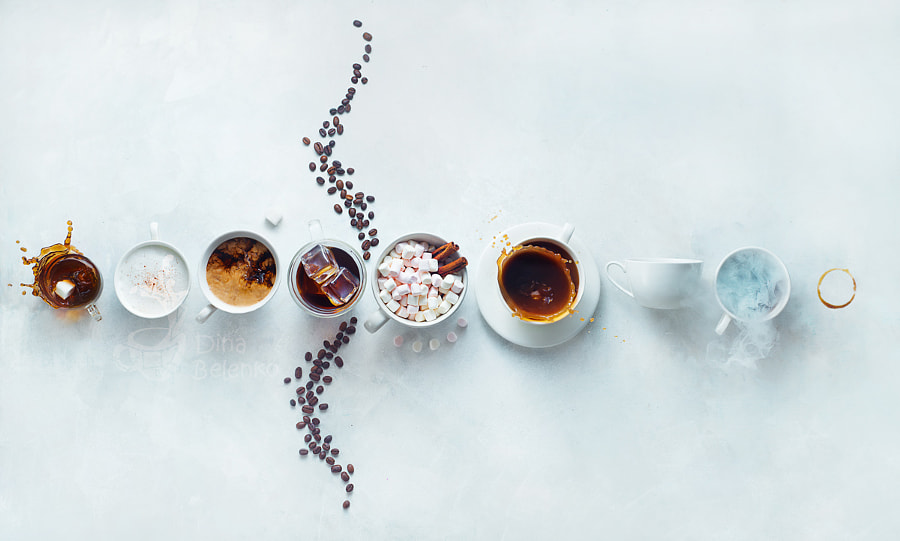 Sure, there might be cases where you have to use acrylic ice cubes or add dish soap to fizzy drinks, but real food is what makes the difference between a nice photo and a mouth-watering one.

“I never use anything inedible to make my food look ‘better,’” Dina admits. “No machine oil, no fake ice cream. After all, what’s the point of being a food photographer if you can’t eat your props?” 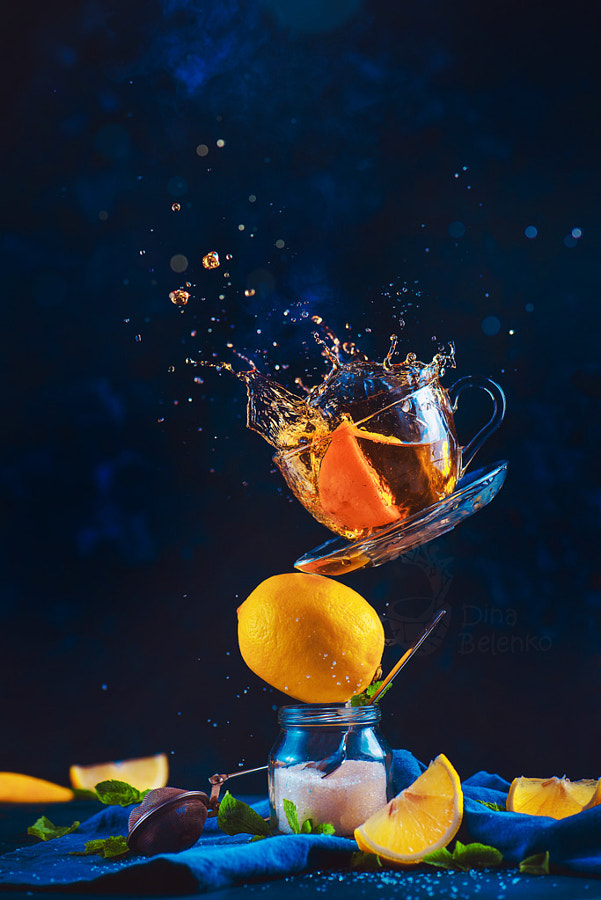 “Use real food” is a suggestion, not a hard and fast rule by any stretch of the imagination, so don’t let it limit the creative process. If using an unusual tool or a surprising material is the best way to achieve your vision, go for it.

“I always say that my favorite piece of gear is not my camera but my glue gun,” Dina says. “I use it to make my cups dance, create flying cookies, and dream up other magical stuff.” 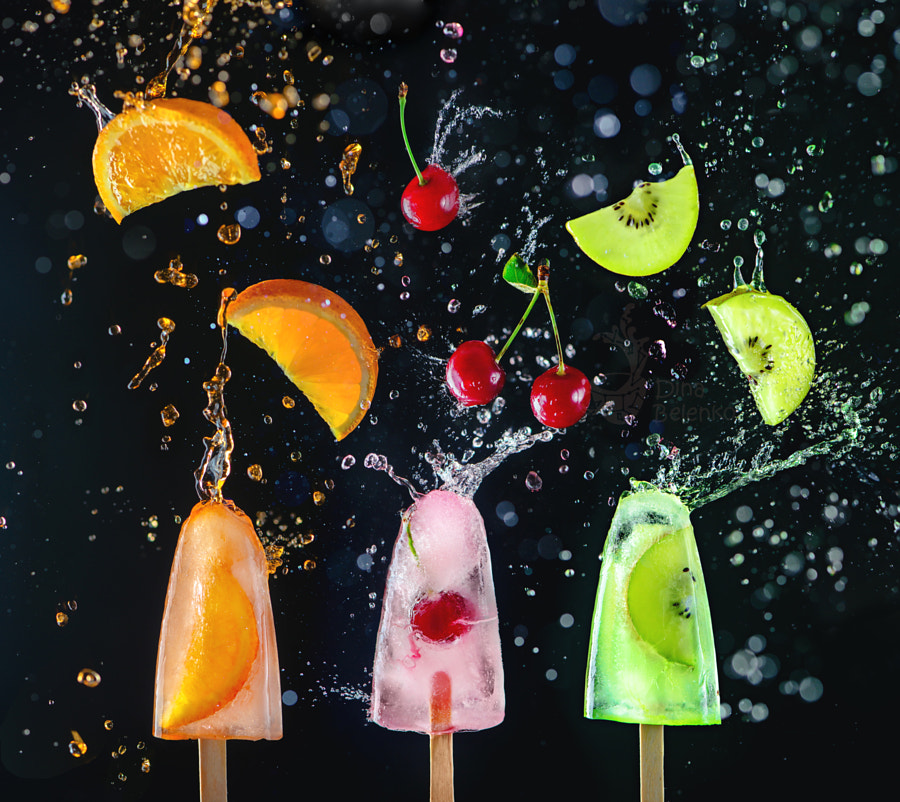 If you have a crazy idea, don’t push it aside just because you think it’s impossible. At the same time, Dina warns against going “all in” on something new. Instead, turn your studio into a laboratory. Use cheap and available materials, and set up a quick shoot that won’t drain all your efforts and resources.

“If I have an idea and I don’t really know if it will work out or not, I just run some tests,” Dina notes. “I won’t create a perfect composition. I just test if something works in principle. For example, can I make a cloud out of flour? Can I make a splash in a particular shape? How can I make realistic raindrops?” 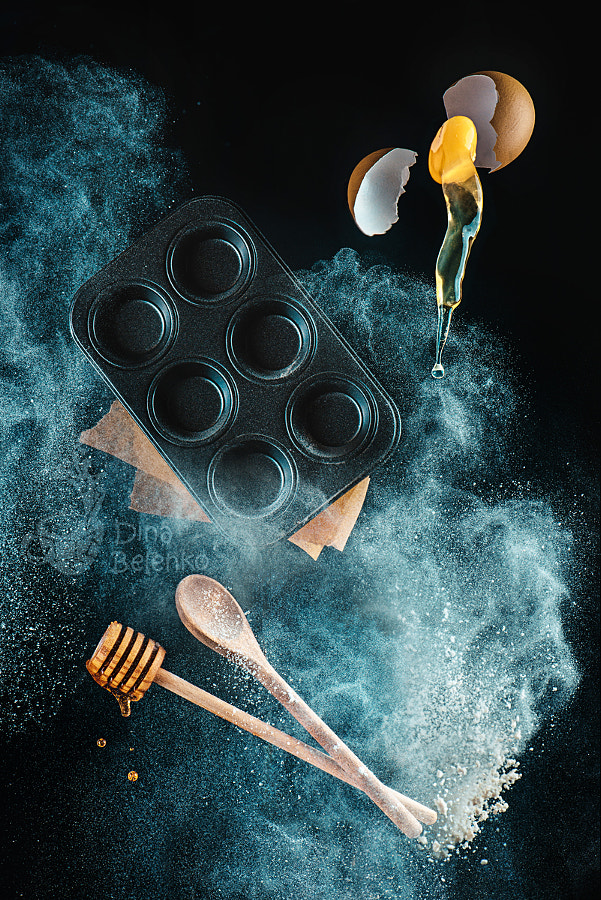 Some of these tests will work, and others might not. Either way, she’s learned something and hasn’t wasted a dime (or a day of shooting).

7. Contradictions can bring a photo to life

Dina’s favorite way of injecting a healthy dose of amazement into her images is to bring together unlikely elements and ideas. “Compare two objects that are basically dissimilar but have one touchpoint,” she suggests. “That touchpoint could be their color, shape, or any other formal resemblance.” In the image below, for example, she’s combined fresh strawberries with Pantone color swatches. 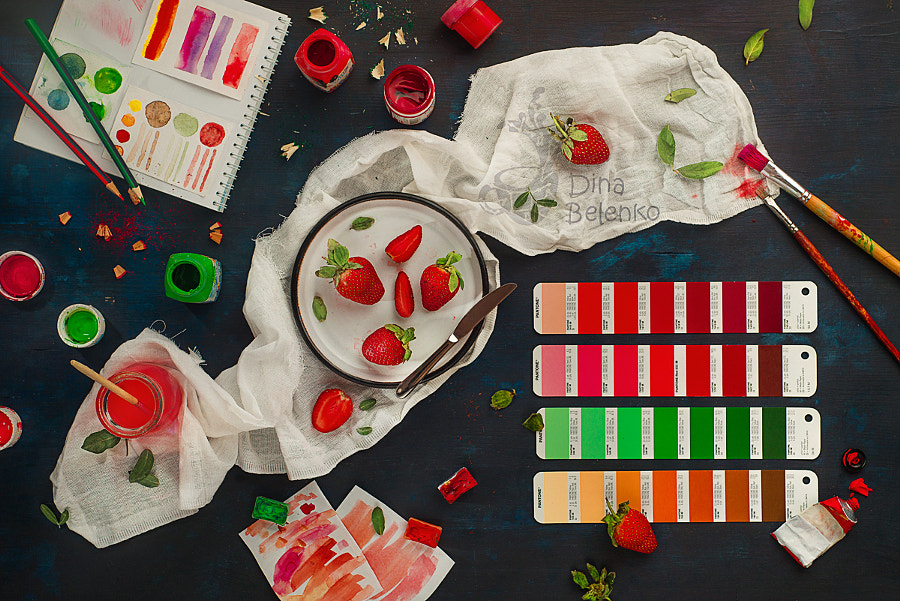 You can also take two seemingly separate ideas and genres, like food photography and 20th-century painting, and make them work together. In the photo below, Dina references the suprematist art movement in an unexpected way, using tea and citrus fruits to create a striking geometric composition. 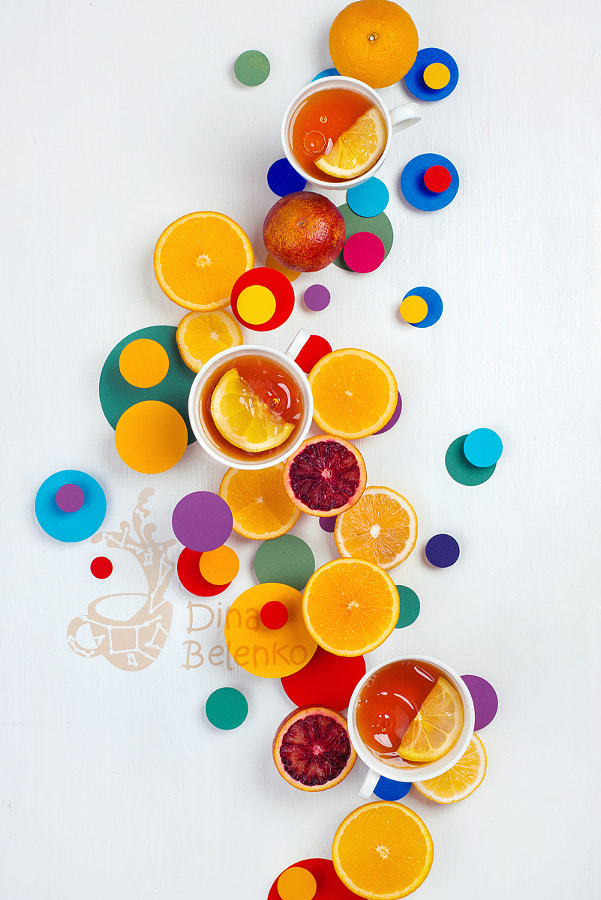 8. You don’t have to be a Michelin Star chef

“I can’t cook at all,” Dina admits. “Although I can bake some passable cookies, I can mess up something as simple as scrambled eggs. When I was shooting for restaurant menus, I worked with a stylist or relied on a chef. Now I mostly work with donuts and coffee, which don’t require much styling.” 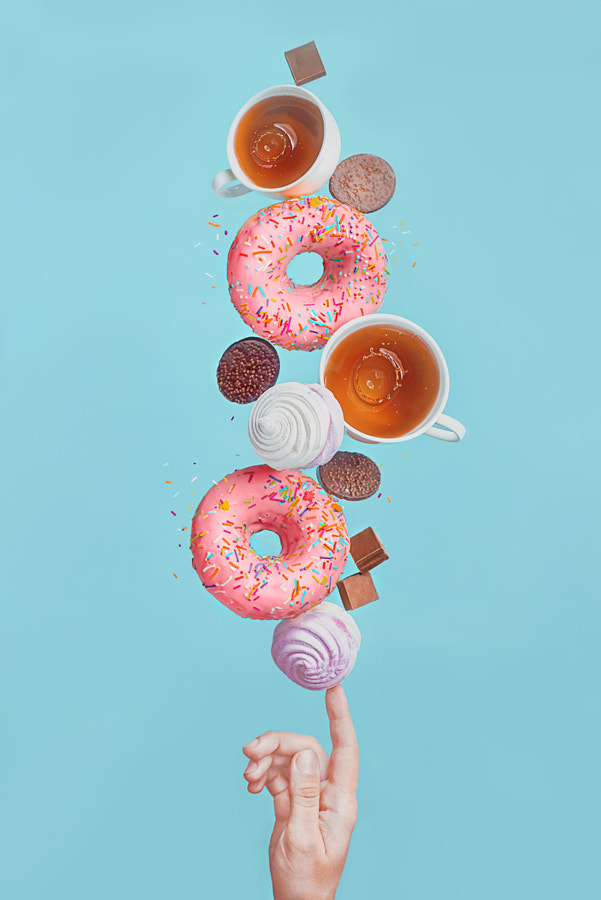 “Everything depends on your goal. If you shoot home-baked pies for your blog, you probably can be your own stylist. But a big advertising campaign might require the combined effort of
many professionals working as part of a team. There are many points between these two extremes, so choose whatever makes you comfortable.” 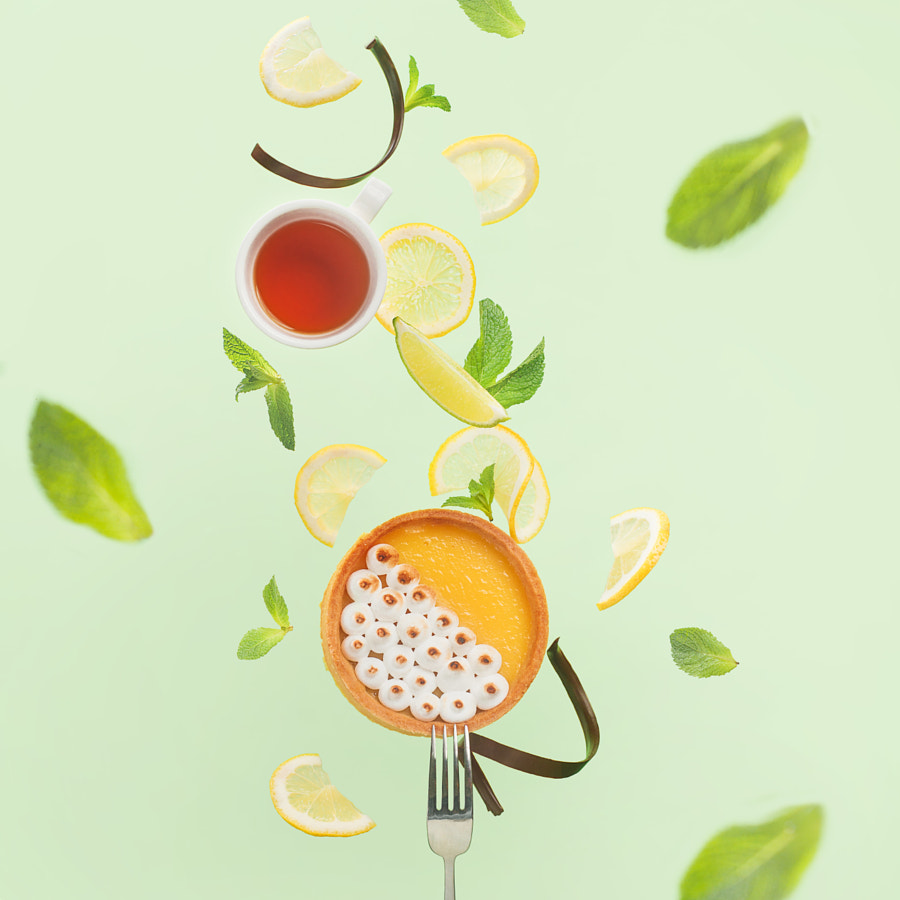 Every dish and prop needs to have a clear purpose, no matter how beautiful it is. The concept comes first, and excessive styling can lead to distractions. “Every item in your frame should be supported by the story you’re trying to tell,” Dina advises. “Deciphering a complex narrative is a hard enough task. Don’t make it even harder for your viewer.”

“Food photography (and photography in general) is a lot like public speaking. You need to figure out what you want to say and then say it. No mumbling, no waffling. Make your statement clear. That’s all you need.”

For more from 500px Brand Ambassador Dina Belenko, check out her portfolio here. Learn more about Licensing your photos here.

The post 9 things every food photographer should know appeared first on 500px Blog.