Exclusive Licensing Contributor Nicolas Fuentes is a Chilean photographer who loves to tell engaging stories through his portraiture, capturing authentic moments between real couples interacting with one another. It is important to him that people are authentically represented, regardless of how they identify. Browse his Licensing collection here.

Q. Tell us a little bit about yourself—where are you from, when did you first pick up a camera?

A. I got my first DSLR camera in 2011, during my last year in school. I got it through a variety of trades on the internet. My first trade was for a small cell phone, which I exchanged for an iPod. From here I bartered for an iPhone, which I traded for a bridge camera. I traded the bridge camera for a MacBook and later traded this for my first SLR, a Canon T1i.

This camera helped me a lot when I first started in photography, but without the series of internet trades, I would never have found photography as I know it now.

Q. Do you remember your first photography shoot?

A. I have not thought about this shoot in some time! My first session was with a classmate named Angela, it was super spontaneous. The shoot was a semi-nude session in her house. The camera was set to automatic and every time she moved, the image went out of focus. I liked the results at the time, but when I look back at the images, the knowledge and experience I have accumulated over the years makes me look at them differently. Q. The color, tones, and texture you incorporate in your images have a strong film aesthetic—how do you process your images to create visual consistency and a defined style?

A. I love this question and it’s something I am rarely asked. It started when I was working on my thesis. I wanted to create something different that would create an impact. This is when I began to notice the LGBTQI+ advertising in Chile and how horrendous it was. I started envisioning how it could be done better.

At the time, my thesis was around, ‘generating editorial photos of LGBTQI+ couples with cinematographic aesthetics’. This was a challenge because I had never taken pictures of couples, let alone LGBTQI+ couples.

I read many texts about cinematography and the aesthetics associated with it so I could apply it to my photography. It has become instinctive now because I always try to imagine how my photography can apply to a film.

Q. You shoot with a Sony Alpha a7 II—what drew you to this system and how does it compare to other cameras you have used?

A. I was shooting with a Sony Alpha a7 II up until December 2018. However, I recently sold it and bought a Nikon D750. But I have since switched back to a Sony, the Alpha a7 III because I am so used to the mirrorless system.

There is a huge difference between reflex and mirrorless. The mirrorless systems currently have so many solutions to problems the SLRs typically have, such as front focus, types of focus—it really helps with capturing portraits.

Having my camera and equipment stolen, really solidified my love for mirrorless cameras. Since that happened, I’ve become paranoid with giant cameras. I really prefer small cameras that will not limit my dynamic range and focus. In 2015, the Sony Alpha a7 II was the best option. 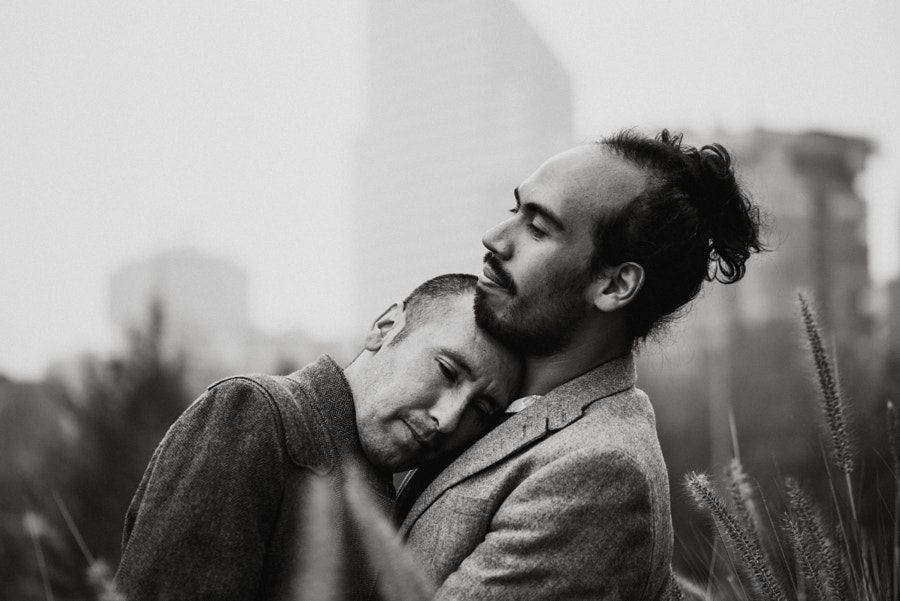 Q. Your images use a lot of ambient light. How do you determine the best lighting conditions for your shoots?

A. I do not focus on lighting conditions, I adapt to them. I am one of those people who works with available light, it does not bother me to increase the ISO in low light conditions. I typically enjoy increases the ISO because I will convert the noise into something similar to grain, which works with my film aesthetic.

One of the things I like most about adapting to light is that each session has its own unique lighting and its own essence.

Q. You also shoot in a wide variety of locations. How do you source a good location? Do these locations carry any significance for you or your models?

A. Similar to how I work with lighting, I always adapt on location as well. We usually look for something that suits the model and the session. I usually approach the scene with the couples as the protagonists, everything else is secondary.

Q. You have a clear ability to capture genuine connection in your images. How do you encourage your models to feel comfortable in front of the camera?

A. One of the main things I do to make the models feel more comfortable is to ask how they met. I believe that knowing their story generates mutual trust. After this, couples become more comfortable and the photo shoot becomes more fun. Q. Many of your sessions feature LGBTQI+ couples, creating intimate moments and capturing authentic connections. Why do you feel it is essential to promote this kind of representation in commercial media?

A. All of this started because of the bad publicity generated by the LGBTQI+ foundations in Chile. The advertising was really horrendous. Instead of attracting the public, it generated a lot of rejection.

Luckily there is a new generation of visual people in Chile that are trying to improve this perspective. It is necessary that the LGBTQI+ movement is normalized in an empathetic way. There shouldn’t only be shocking publicity that highlights only negative news and deaths related to the LGBTQI+ community. There should be a focus on love, affection, and tenderness.

Q. By licensing your content, you are contributing to the movement toward equal and authentic representation in commercial photography. How would you encourage others who shoot content similar to yours to do the same?

A. I don’t know how the LGBTQI+ movement is progressing internationally, I can only really speak from the perspective of Chile. It is time to cut the hatred represented in the visual pieces associated with the movement, where killing, blows, and blood are generally seen. It is time to show affection within the LGBTQI+ movement, and to show the love that humans have in general.

Changing reality and actively improving the future with photography is the best thing I can do at the moment. I hope that other people can begin to show the same kind of activism in their visual pieces as well.

Q. What is next for you in photography? Are there other projects in the future?

A. I hope to continue photographing LGBTQI+ couples as long as I can and that my project “ProyectoSuHistorias.lgbt” keeps moving forward. But I also want to expand my photographic horizons and create new content. Because of this I’m putting together a new photographic project focused on coming out stories from different people of the LGBTQI+ community in Chile, to show how different and similar realities can be. It’s a project I’ve been thinking about for months and hope to launch soon.